A socialite known for being controversial had recently gone viral again when he made his entrance into a wedding ceremony with six heavily pregnant women. The man claims that they are all carrying his children, and that man is Pretty Mike. He shared a picture of him in a pink and yellow ensemble while being surrounded by six women matching silver with ribbon outfits on Instagram.

Pretty Mike wrote, "no film trick. We are just living our best life."

This stunt of his has earned the whole nation's attention and was even covered on national TVs.

He shared this picture and after that, a video of him feeling each bump while they got into line to enter the wedding location. 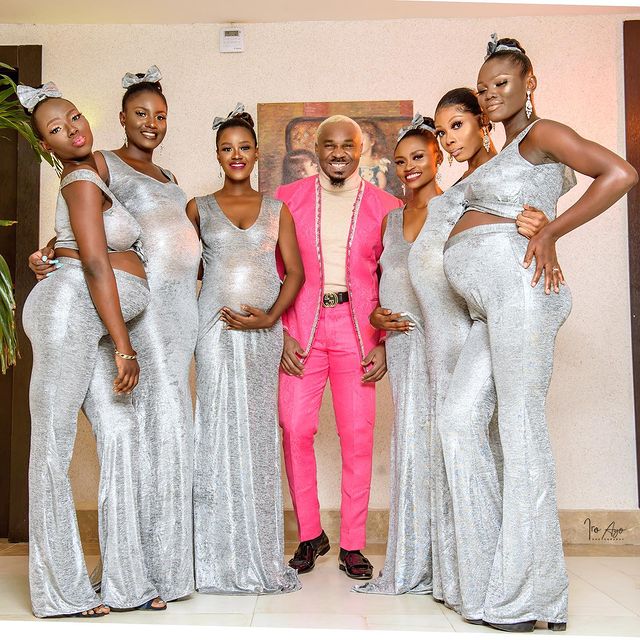 This act of his has earned him some criticisms; one writes, "Same madness, different years."

Another tweeted, "This is one reason I must have a heavy military presence at my wedding venue. You'll not come and chase clout on my special day."

Some said that Pretty Mike needs therapy help and thinks he has some mental illness.

A post shared by Pretty Mike Of Lagos (@prettymikeoflagos)

Pretty Mike was previously arrested in 2017 when he showed up at a wedding party with women on a leash and seems to enjoy doing his stunts at wedding parties, seeing how he did it again this time. His behavior in 2017 led to a massive outrage that caused the police to arrest him and made his sign to never put any women under any leash or any degrading treatments.

Pretty Mike was attending the wedding of actor and comedian Williams Uchemba to a fellow celebrity Brunella Oscar. Uchemba is a Nollywood movie star and held quite a grand wedding where many other big names in the entertainment industry are also invited.

Just last year in September, Pretty Mike was posing with five of the women in wedding dresses.

A post shared by Pretty Mike Of Lagos (@prettymikeoflagos)

He wrote that he had a dream to marry two of his exes and three of his current girlfriends in the picture. Pretty Mike, whose real name is Mike Eze-Nwalie Nwogu, has always been open about being in multiple relationships at once. He wrote, "We all have dreams, and we all have fantasies."

The 'wedding party' was held with several guests witnessing them walk down the aisle. After that, he did another photoshoot with all six women in 'Maleficent' theme where the girls wore black dresses and Pretty Mike had white horns and joked, "Not all exes are bad... I mean, look at me. I'm someone's ex."

Pretty Mike is a self-claimed philanthropist and the owner of a nightclub in Lagos, Nigeria's biggest city.