People Find A Dog 100% Covered In Tar, Work Tirelessly And Successfully Save Her

Man is the most dangerous animal in the world and it is no surprise that the environment is getting affected by it on a very large scale. Humans have destroyed flora and fauna of the planet in more ways than they have made the world a better place. If it wasn’t for those kind-hearted empathetic people who tend to go out of their way to help animals, many animals would end up seriously harmed or dead. There is a not-for-profit organization called “Proyecto 4 Patas”, that along with a few locals rescued a dog recently, whose name is Aloe and she was completely covered in tar.

The members of the organization took the responsibility to help and rescue Aloe out of the tar she was covered in. It took them 8 volunteers and 9 hours of nonstop effort along with some 50 liters of oil and 3 baths to remove all the tar and get the dog completely clean. The good news is that Aloe is now completely healthy and safe and this is an example of how determined and ready people of Buenos Aires are to help in every way possible.

This organization of animals’ rights from Argentina saved the life of a dog and is sharing the story with us! 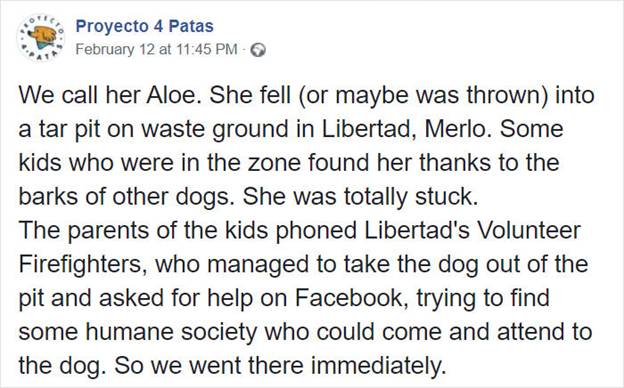 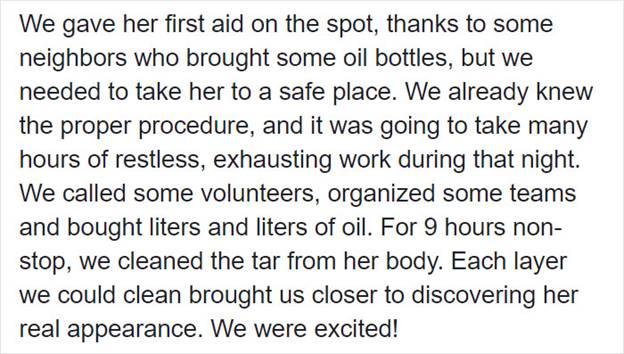 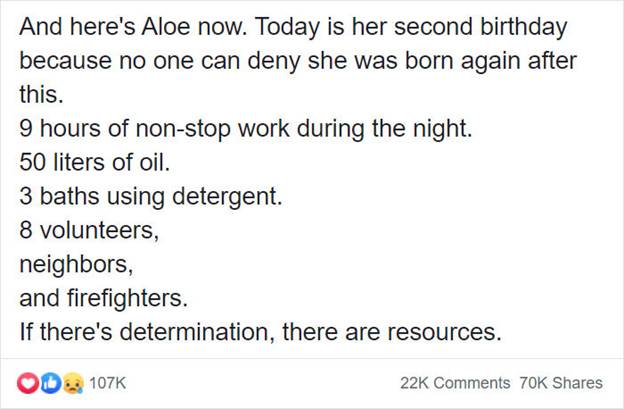 The organization of Proyect 4 Patashas has more than 313k followers on Instagram and around 2 million people who are fans of the organization on Facebook. They have many supporters because they stand completely against animal experiments or using animals in clothing, in food or for any sort of entertainment because animals also deserve rights and they are not a commodity that we have any right over. 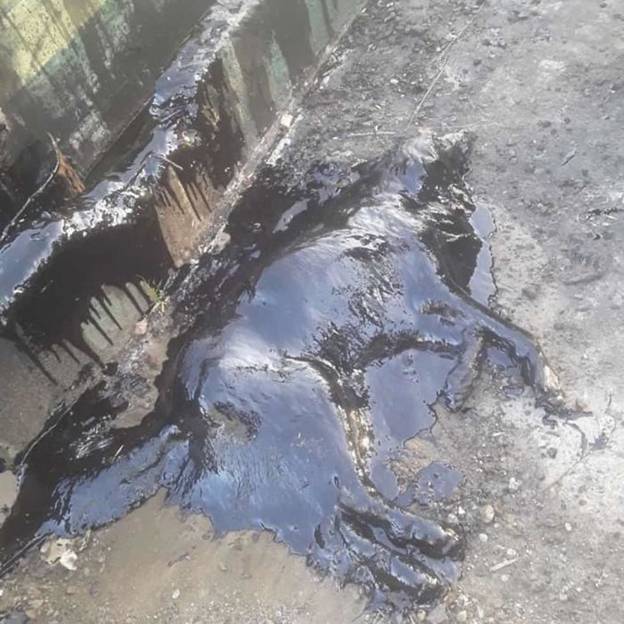 We know from a representative of Proyecto 4 Patas that Aloe is doing absolutely fine now and she feels great. She is such an adorable dog. She loves eating absolutely everything and she follows the people of the organization all the time. Everyone loves her and she loves to get and send love.

Everyone, there is focusing on getting the dog healthy as she is really thin and will be looking for a family that will adopt her. 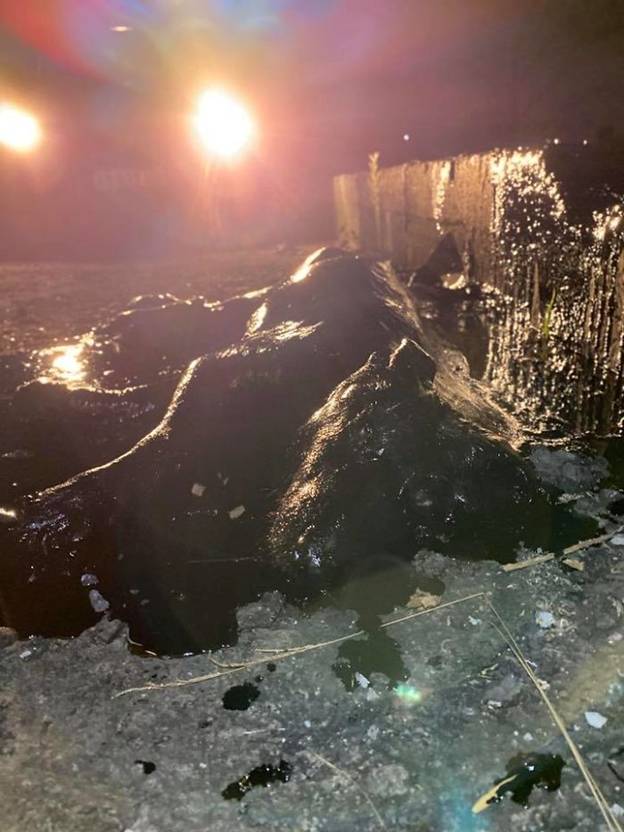 We know from them that they help dogs and cats in many emergency situations and they have been doing it for the last 13 years. They said that they never found a dog that was in any situation close to Aloe. She had suffered a lot with that desperation of not being able to move for such a long time. 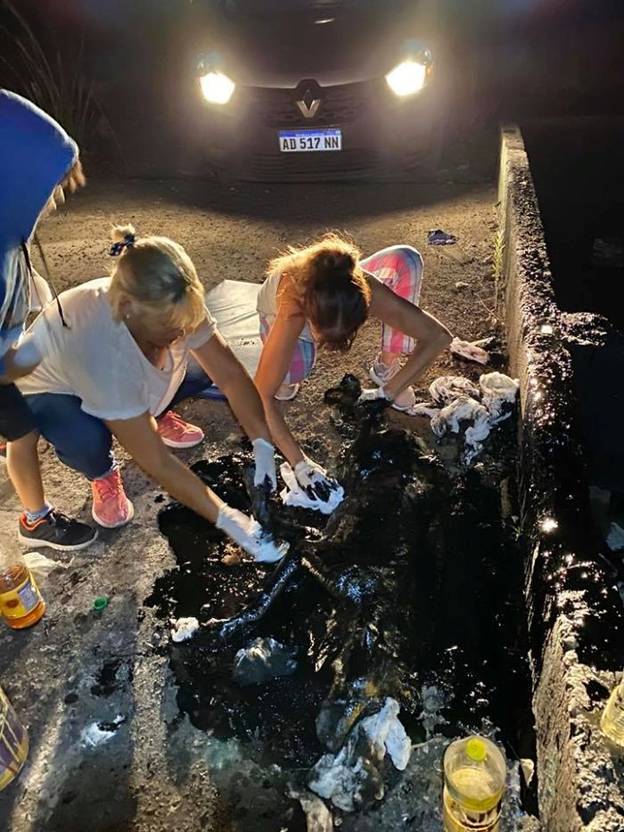 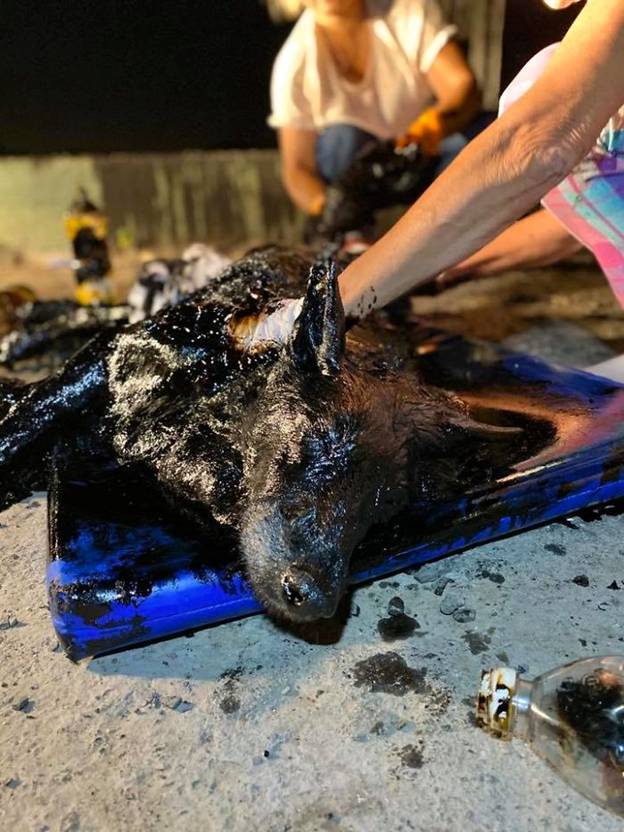 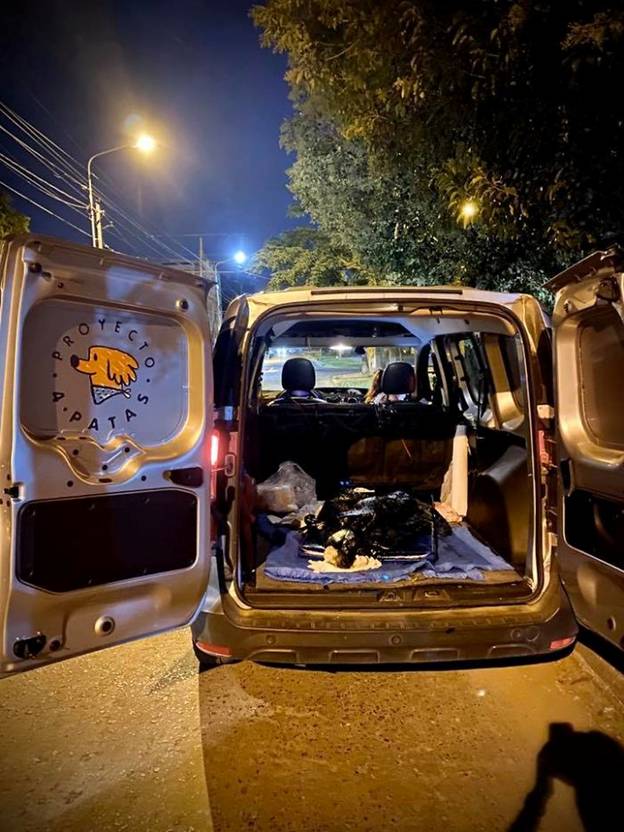 The organization believes that all the animals need a guarantee of all the basic rights and that includes the right to life. This includes the fight we should start against people that hurt animals for no reason at all. They couldn’t find out if Aloe fell into the pit of tar or she was pushed by some cruel person. 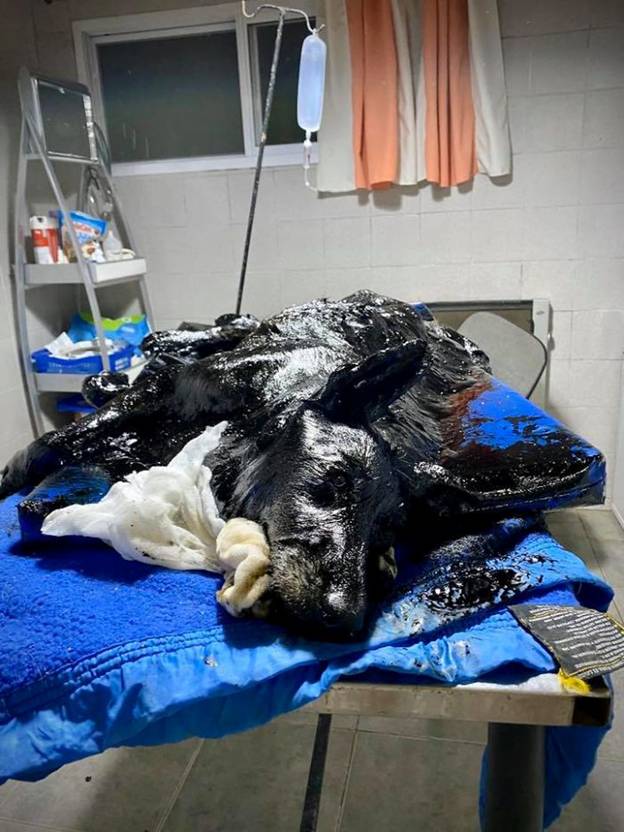 If anyone of you ever encounters any animal covered in tar, please immediately contact an animal right group or organization or the local authorities that have an idea of what to do.

In case, you have no one around you then massaging a lot of vegetable oil onto the body of the animal will loosen the tar and help in cleaning the tar. However, kerosene must be avoided because that will cause damage to the skin of the animal.

The volunteers used vegetable oil to rub on Aloe’s body to loosen up the tar. 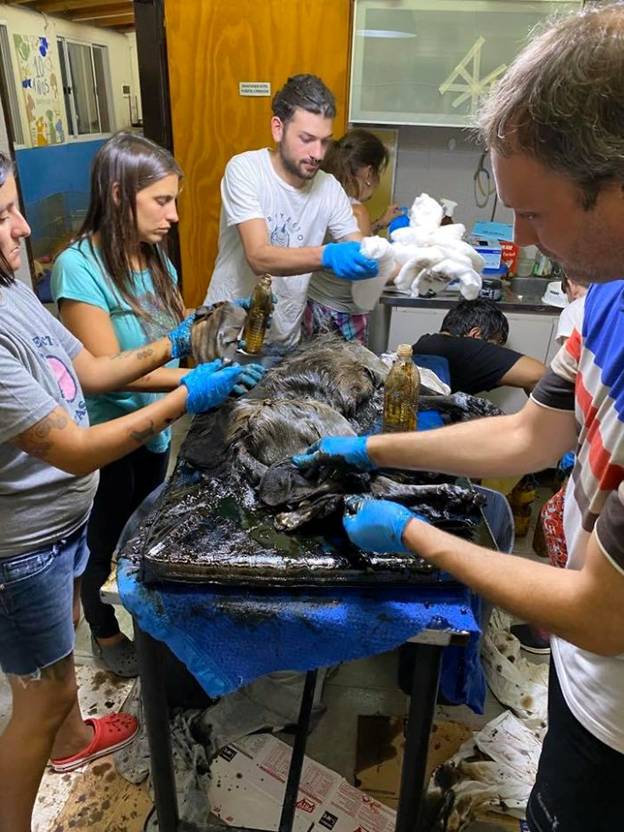 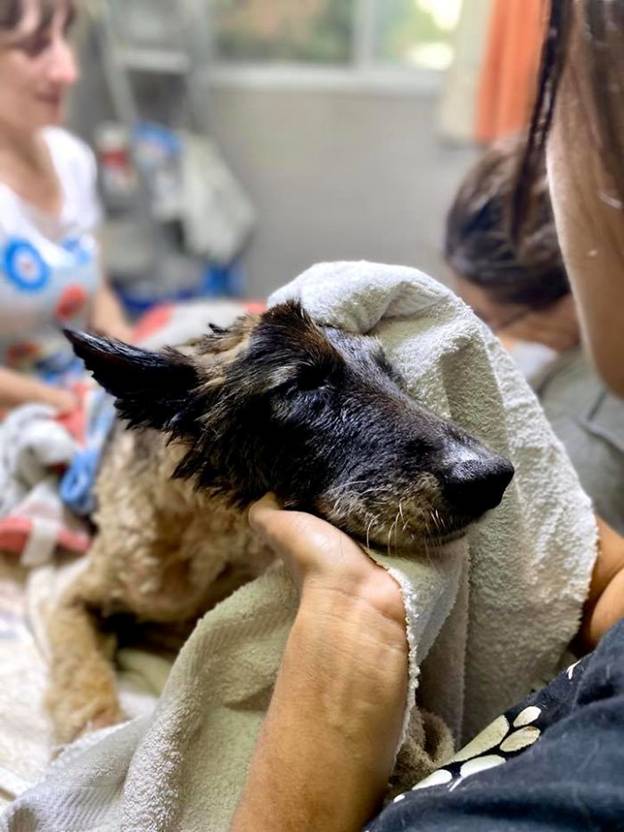 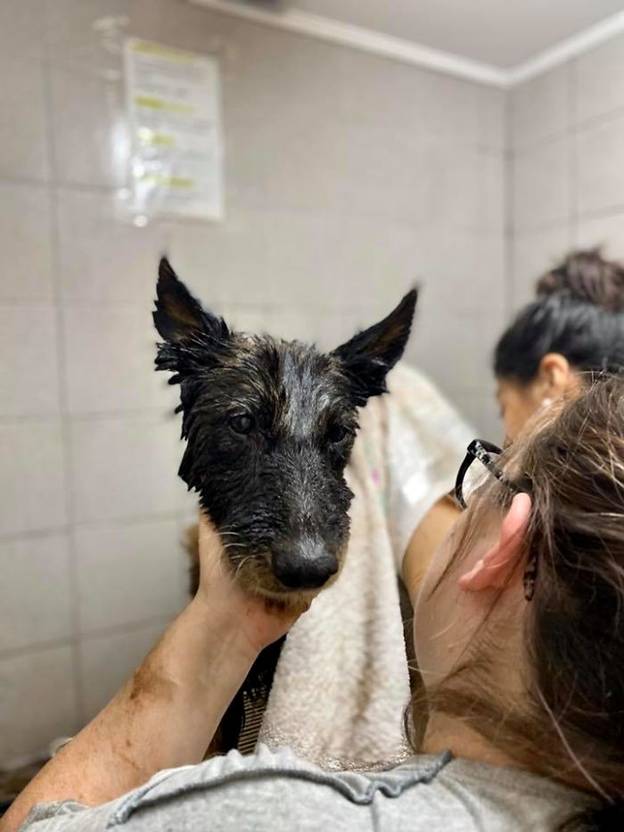 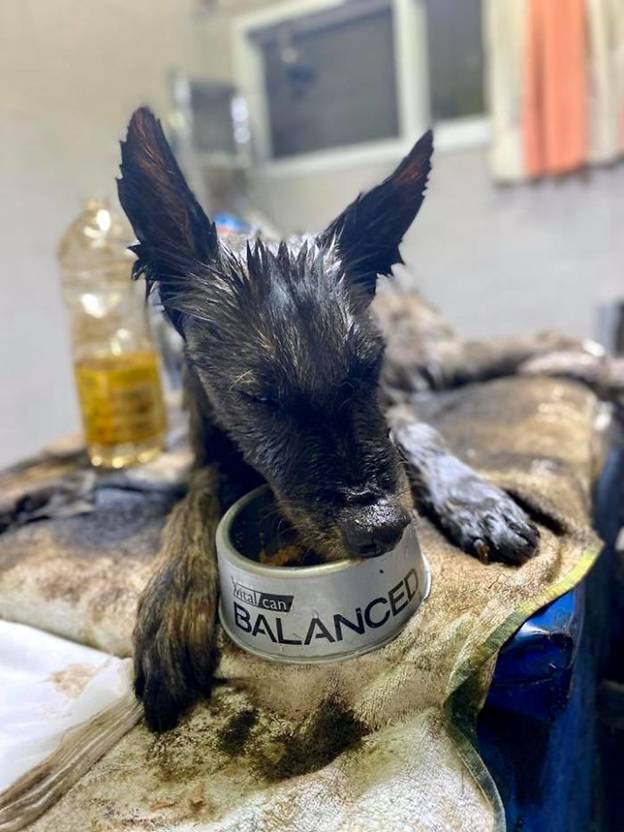 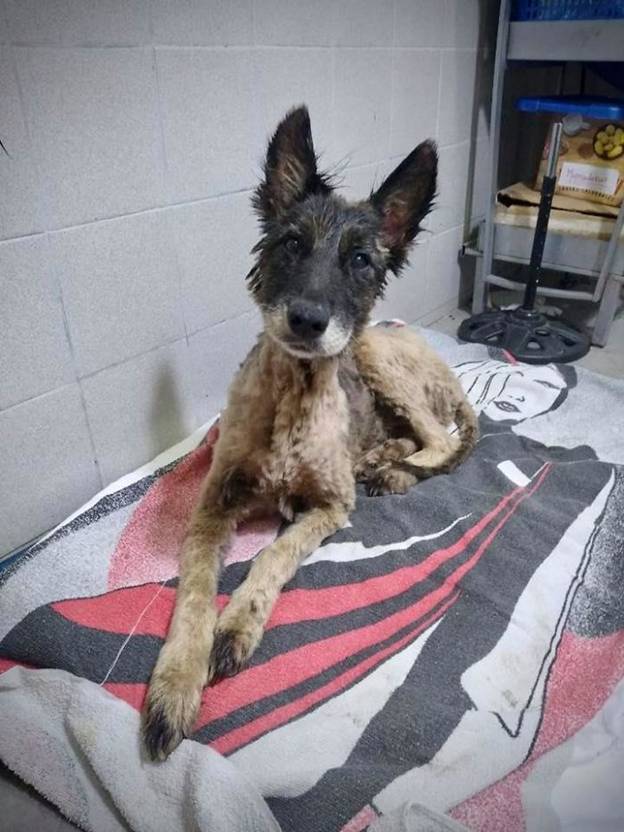