A mom-of-three had to swallow her pride as her son's school turned her away because she was deemed to be wearing inappropriately around the school area.

Institución Educativa Instituto Técnico Superior Industrial, a Colombian school in Soledad that Isabel Castro's son was attending invited students and their parents to discuss Covid-19 regulations. But the woman who came with her husband, Cristian Caviedes, was not allowed to enter the school ground due to her low-cut white blouse not covering her cleavage enough.

As pictured below, Isabel did not see anything wrong with what she was wearing. 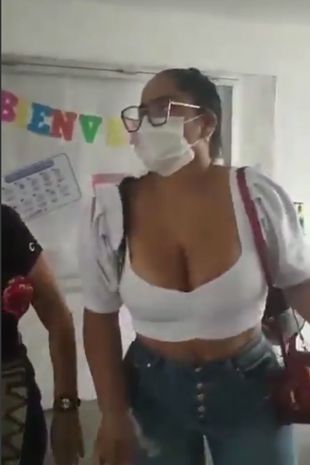 The woman told El Tiempo, "I left home and looking at myself in the mirror I thought I was well-dressed. I was wearing jeans and a blouse which is quite low-cut but far from vulgar."

"Read the rule book," they added.

She felt that the school, particularly the staff, had disrespected and discriminated against her because she is a mother.

The mother continued, "I feel discriminated against because nobody has the right to point at, judge, or criticize another person."

"I felt well-dressed; the fact I have three kids doesn't mean I have to walk around covered up, nor consider myself ugly and dour without expressing my happiness," she reasoned.

Meanwhile, her husband likened such strict dressing protocol to the situation in a country that has recently been gaining attention, Afghanistan.

"Think about all the women suffering this sort of harassment at the moment, for example, in Afghanistan," said the man. "And then you wonder how this school official wants people to dress."

Why school should enforce their policies to protect the children, was Isabel's clothing so indecent that she had to be asked to leave the grounds?