22 Most Daring Outfits Celebrities Have Worn In 2021 So Far

With the year 2021 steadily coming to a close, it’s pretty safe to say that the world has been treated to mouth-opening fashion moments, courtesy of our celebrities. Mainly, their naked look is one of the most head-turning in recent years, and so far, celebs have been incorporating sheer panels, thigh-high slits, and even mesh into their stand-out fashion choices that utterly scream. Oh yeah!

Celebs, including Kendall Jenner and Rihanna, have experimented with fashion trends, taking a potentially unconventional style and turning it into a global fashion masterpiece. We’ve been lucky to enjoy a handful of red carpets, so collated here are a few of the most widely daring fashion outfits that drew the attention of paparazzi without a twice think and graced Instagram. You will be left speechless, same as it had previously got people talking.

On March 25th, Kylie donned a see-through, high neck bodysuit made from mesh, with panels of red velvet covering both her chest and waist. She complimented the outfit with brown plastic heels, black face masks, a Louis Vuitton purse, and a red leather coat. Kylie had visited a restaurant in West Hollywood, California, wearing the daring outfit. 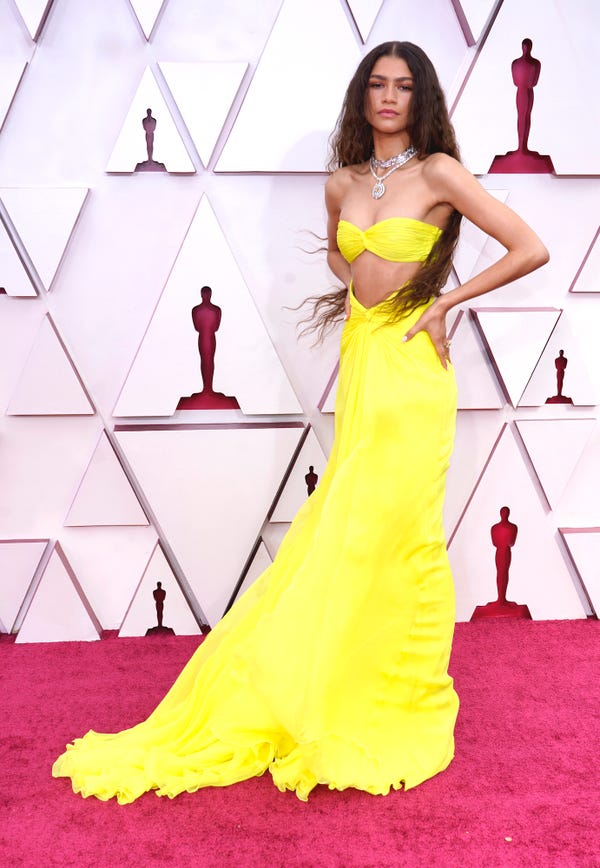 For Oscars in April, Zendaya wore this fluorescent yellow dress with a cutout across her waist. The strapless gown was designed by Valentino and had a bralette-style bodice and a floor-length skirt that wrapped to form a scoop-style cutout. She complimented the look with $6 million worth of jewelry and wore her hair long in waves.

Priyanka rocked this beige bodysuit with a see-through overlay to the Billboard Music Awards in May. The sparkling dress had long sleeves covered in crystals and a plunging V-shaped neckline that led to a thick metal belt. The dress designed by Dolce & Gabbana also had a tall slit on its skirt. Priyanka accessorized the look with gold sandals. 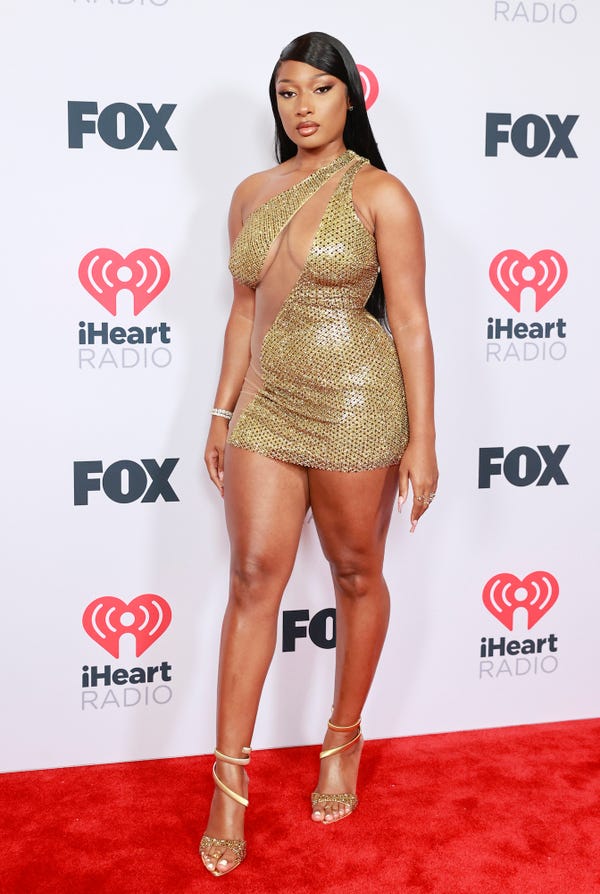 Stallion opted for this golden mini-dress for the iHeart Radio Awards in Los Angeles on May 27th. The outfit had a single strap that ran parallel to a sheer panel that extended from her shoulder to her hop. The rapper completed her look with gold sandals wrapped around her ankles, a sleek hairstyle, and a diamond bracelet. 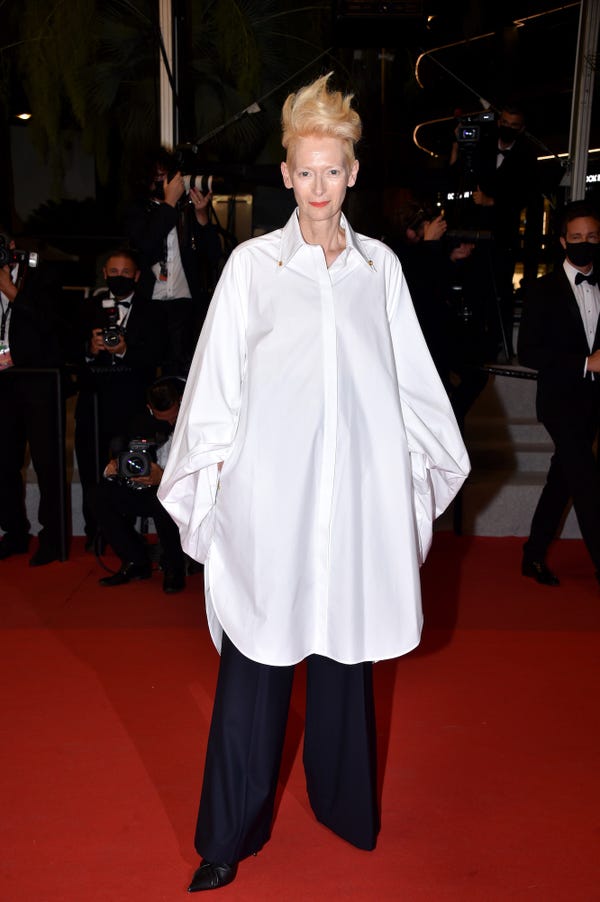 Swinton chose an oversized blouse and pants for the Les Olympiades screening on July 14th. Her white long-sleeved top extended to her knees, and her pants were almost covering her pointed heels. She equally wore her hair in a swirled style atop her head. 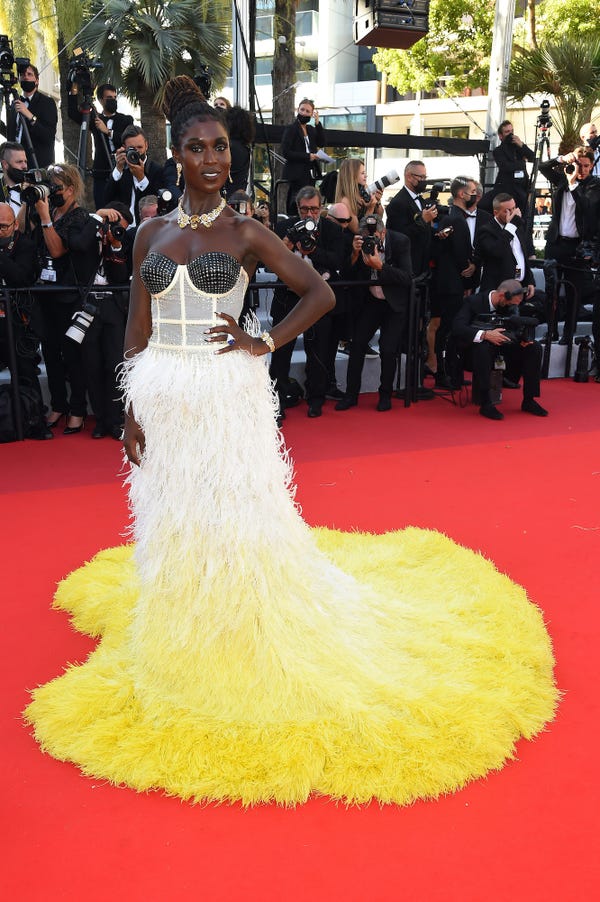 At the 2021 Cannes Film Festival Screening on July 8th, Jodie wore this custom Gucci gown to the Cannes Film Festival. It was strapless with a black and tan bustier top covered in silver crystals. Its skirt made from white and yellow feathers reached the floor.

At the BET Awards in Los Angeles on June 27th, Ciara dazzled in this Alexandre Vauthier outfit with long sleeves. The sparkling jumpsuit had a scoop-style neckline, a thick belt, and formfitting pants tucked into her bedazzled boots.

Doja stormed the iHeart Radio Music Awards in this green, see-through gown designed by Brandon Maxwell. The dress with a high neckline had a cape-style back extended into a short train behind her. She didn’t wear a shirt or bra underneath the gown. However, Doja donned green underwear, long green nails, shining sandals, and round earrings. 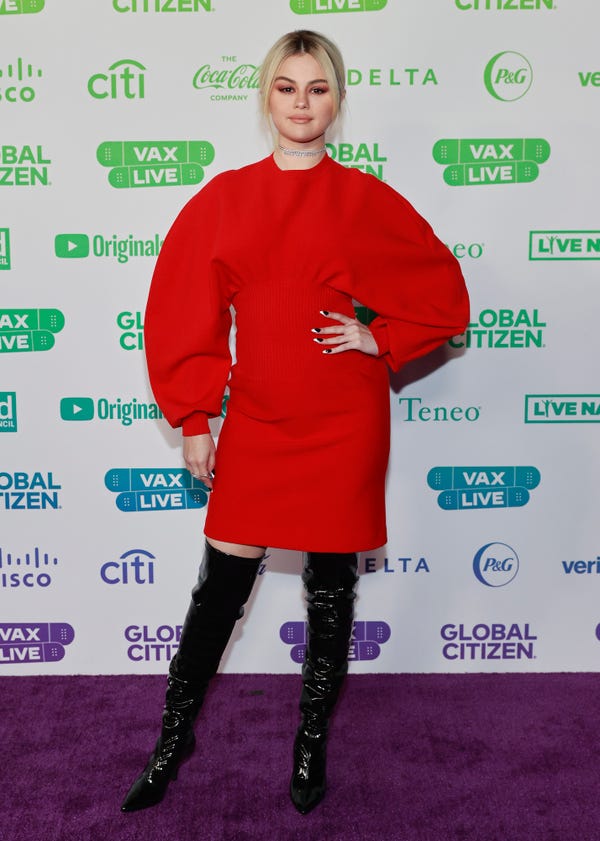 On May 8th, Selena donned an unconventional mini-dress for the Golden Citizen VAX LIVE Concert. Her red dress was form-fitting around her waist, but its sleeves bubbled around her arms and shoulders. She paired the outfit with patent leather boots, a choker necklace, and an updo hairstyle with loose strands. 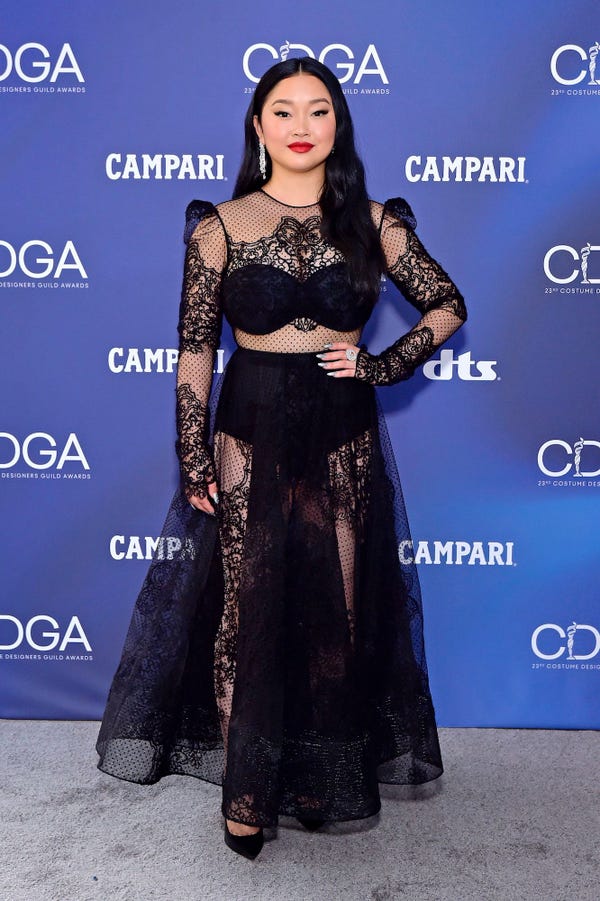 At the 2021 Costume Designers Guild Awards on April 13th, Lana wore a black gown with sheer panels. The dress designed by Christian Siriano had a strapless bra and high-waist shorts. Its transparent lace overlay had a pleated skirt and long sleeves that puffed at the shoulders. However, she complimented the look with diamond earrings, red lipstick, and pointed pumps.

At the Grammys in Los Angeles on March 14th, Cyrus donned this cream gown designed by Schiaparelli. The dress had a plunging scoop-style neckline and a floor-length skirt. She paired the dress with a mix of silver and gold jewelry.

Cardi exits and enters a car in Los Angeles on January 22nd wearing this red dress with a see-through bodice. Pierre-Louis Auvray designed the outfit. It had a cropped sweater across her shoulders and a white border made from thick material that extended across her chest. According to Auvray, the dress isn’t entirely sheer. Instead, it featured a woman’s silhouette printed on the fabric. 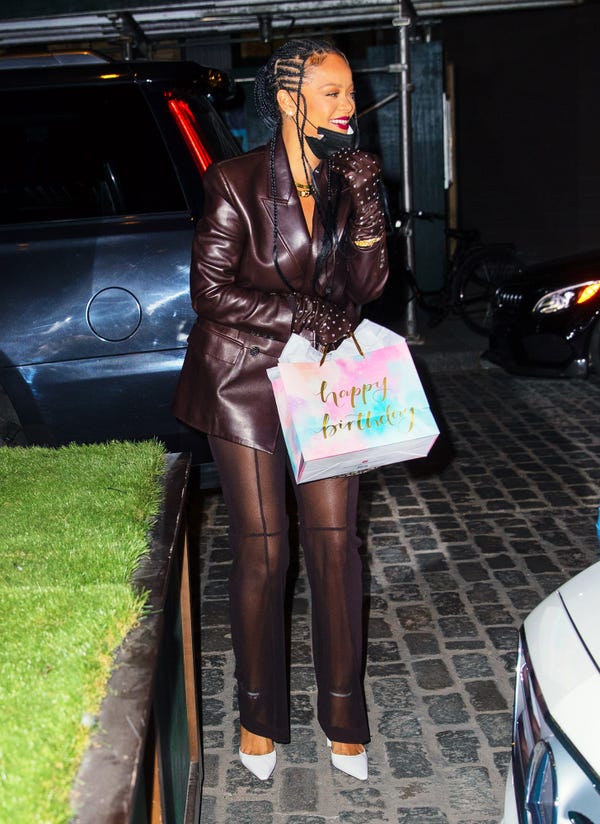 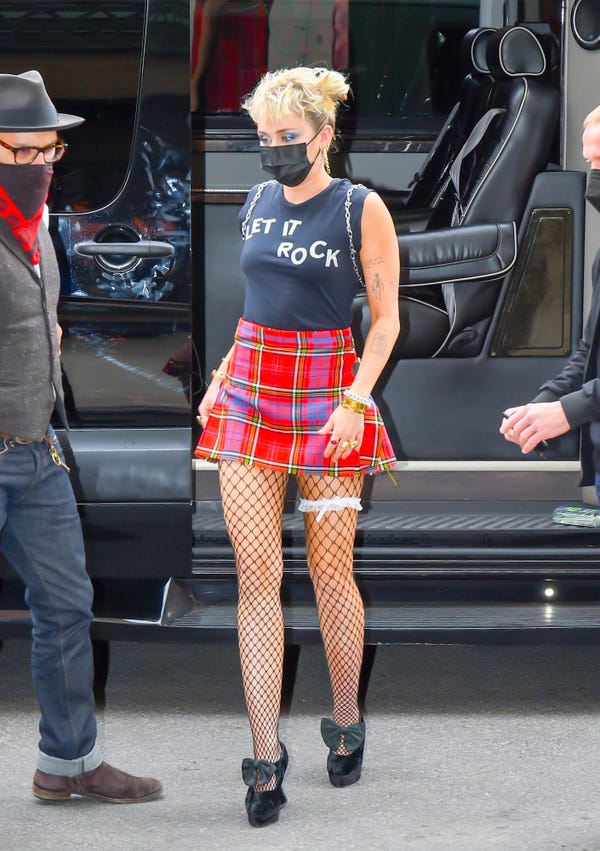 The musician rocked this DIY-looking T-shirt that reads: Let it Rock’ while walking around New York City on May 6th. Cyrus tucked it into a plaid mini-skirt and completed the look with fishnet tights, velvet heels with gray bows, and a white garter.

At the Billboard Music Awards on May 23rd, Fox wore this black Mugler dress with a crisscross bodice covered in cutouts. The gown had a ruched see-through skirt made from black mesh. On the other hand, Machine Gun Kelly donned a pretty standard black blazer and white shirt. 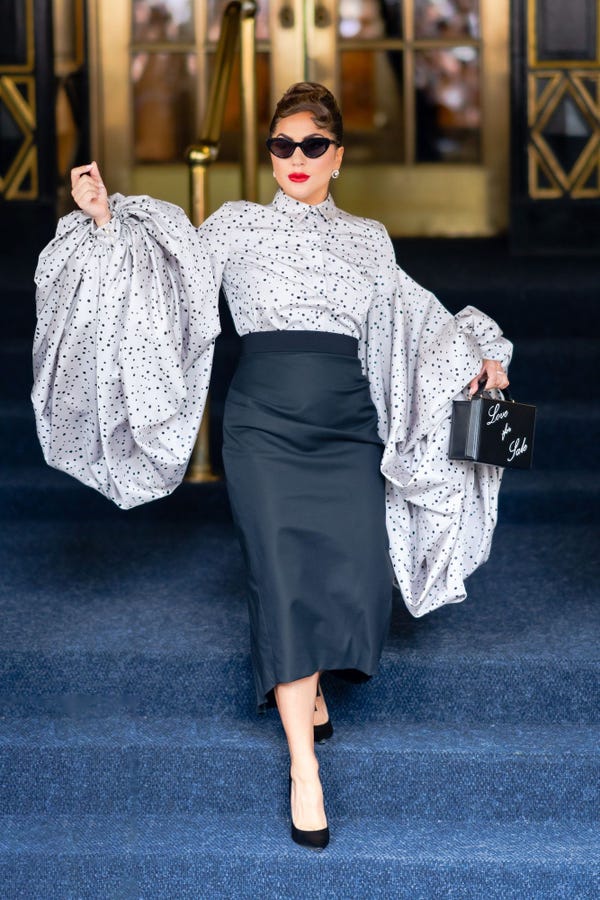 In New York on July 2nd, Gaga was photographed leaving a hotel while wearing a button-up-polka dot print shirt with a high neckline and giant sleeves. The singer wore the top tucked into a black midi skirt and completed the look with black sunglasses and a square handbag.

At the BET Awards in Los Angeles on June 27th, Stallion arrived in a white gown with bold slits on each side. The dress designed by Jean-Paul Gautier had straps across her shoulders and hips. She completed the outfit with diamond jewelry, a white clutch, and sparkling sandals.

At the iHeart Radio Awards in Los Angeles on May 27th, Lovato wore this blazer with no shirt underneath. She accessorized the purple suit with a diamond necklace, silver platform heels, and hair styled in a mullet.

On March 15th, Doja at the Grammys in Los Angeles wore a leather bodice with long sleeves zip up front and a green and black skirt made from feathers. Designed by Brett Alan Nelson, the musician debuted a modern mullet that night.

At the BET Awards in Los Angeles, Saweetie looked gorgeous in this purple and gold outfit with an extended train. The dress was designed by Dolce & Gabbana. It had sparkling gold straps that connected to two rows of purple mesh. Saweetie equally wore a sheer purple skirt, a thick gold band across her waist, and a thin purple bra.
Tags: #Fashion #Celebrity #Daring Outfits #Celebs Daring Outfits #Daring Looks 2021 #Entertainment