10 Colourized Pictures Show The Actual Horror Of The Holocaust

It is unfathomable how there are people these days who claim that the Holocaust never happened - when images have been captured and there are living survivors who could hardly tell the horrible treatment they received in the Auschwitz as well as other camps.

“Never shall I forget the little faces of the children, whose bodies turned into wreaths of smoke beneath a silent blue sky”, says Elie Wiesel, a Holocaust survivor.

The Nazis indiscriminately captured and sent Jewish to their concentration camps, whether or not they are practicing Jews or half-bloods. Inside, these people were treated very harshly and some don't even survive days inside. Many were killed in the camps from starvation, beating and gassing. Children were not excluded.

Tom Marshall, a British photo colorizer who found many of the pictures during the liberation taken by his great Grandfather, The Reverend Charles Martin King Parsons CF. Charles was an army chaplain with the 9th British General Hospital during WW2.

These are grim reminders of how cruel humans can be and destructive power can be when given in the wrong hands. 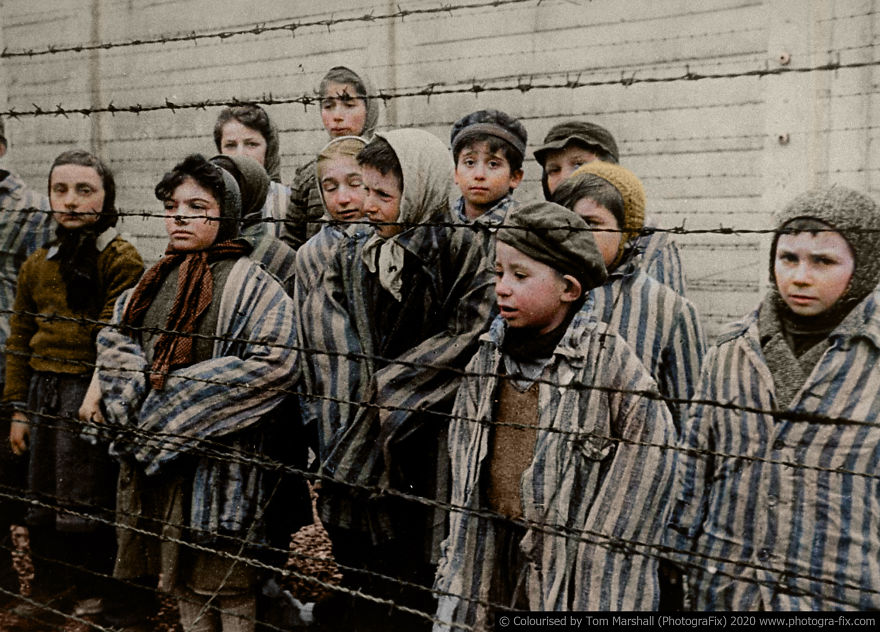 Many children would be indicted as political prisoners and sometimes with reasons completely made up. This picture was from a Soviet film on the liberation of Auschwitz, January 1945. 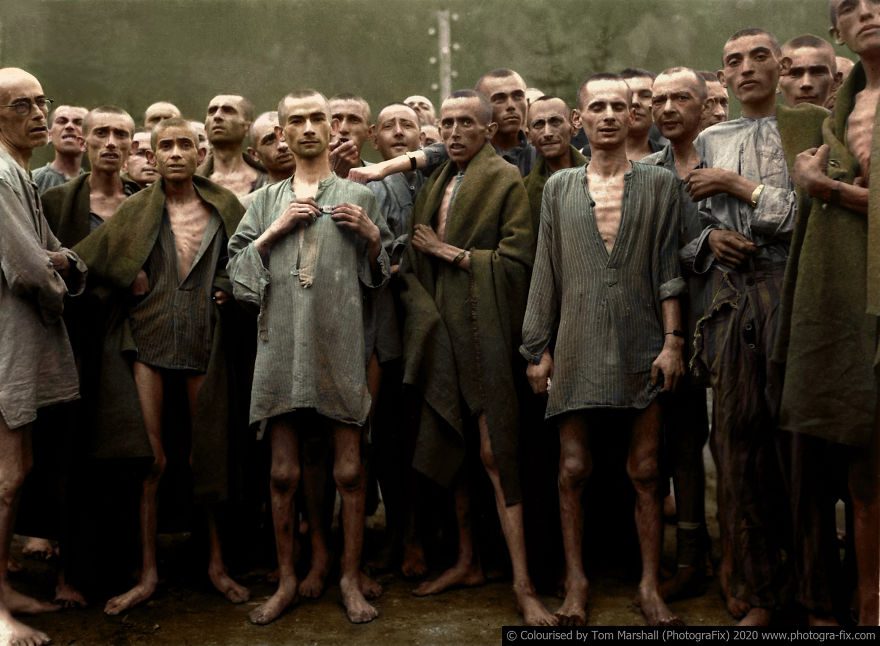 Ebensee is a sub-camp located near ‘Mauthausen’, a main camp in Austria. This pictures shows men purposely starved and is also a location known for their human experimentation. It was liberated by the 80th Division of the U.S. Army. 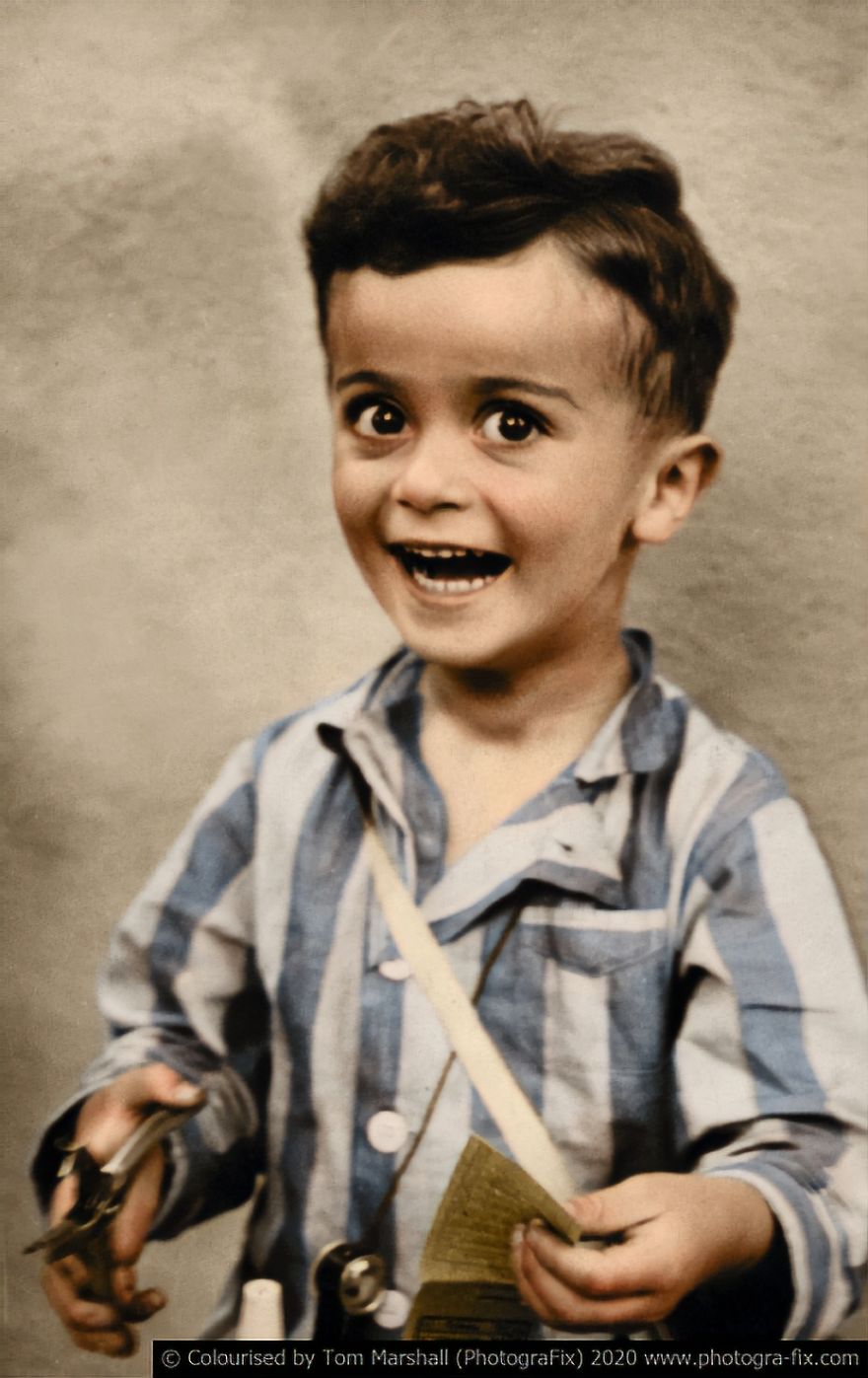 The boy was given a stapler when he had his portrait taken. He was later murdered in a gassing chamber with his grandmother months later in Auschwitz concentration camp. 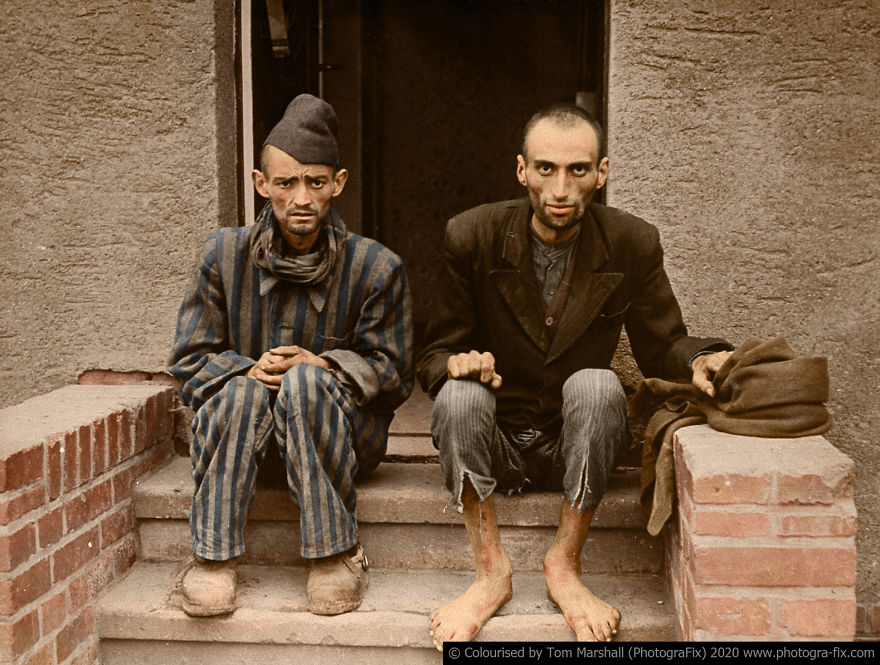 Lager Nordhausen is a Gestapo concentration camp with over 3,000 to 4,000 inmates. Many of them are mistreated, beaten and starved. These are images of the emaciated inmates after they were liberated. 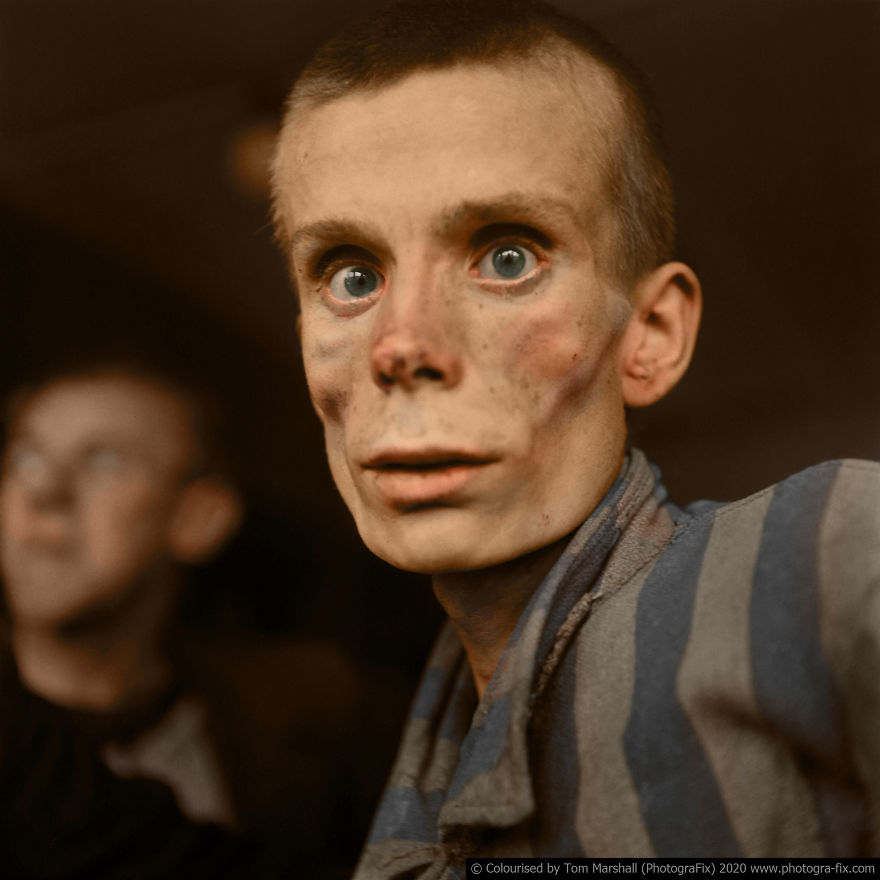 Dachau concentration camp was the first German camp that opened in 1933. This girl is 18 years old and was an inmate before liberated in 1945. There were more than 200,000 registered in here and over 31,591 deaths were recorded. While it's not an extermination camp, the people were treated so horribly, hundreds would die every week.

A living skeleton in Austria. 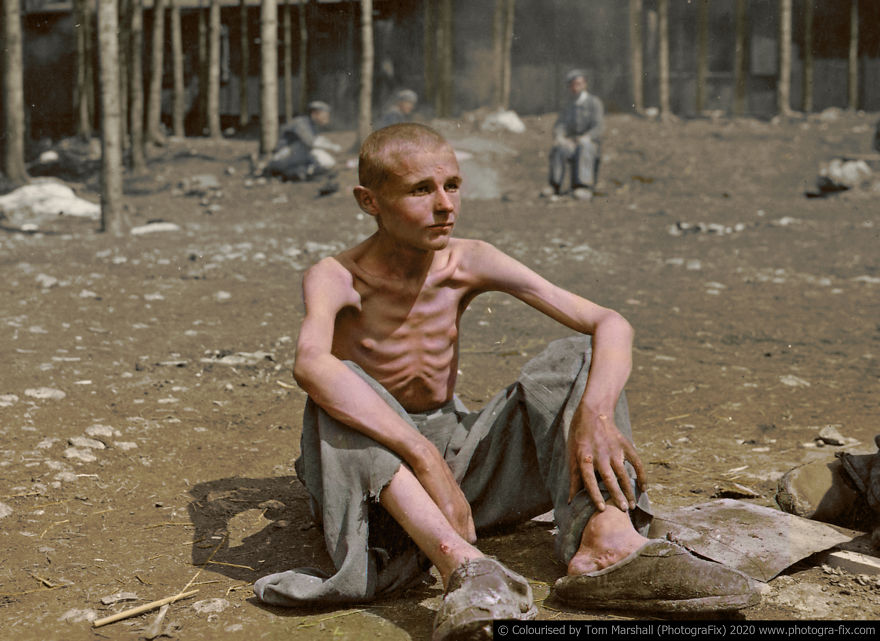 The liberation and burning of Bergen-Belsen. 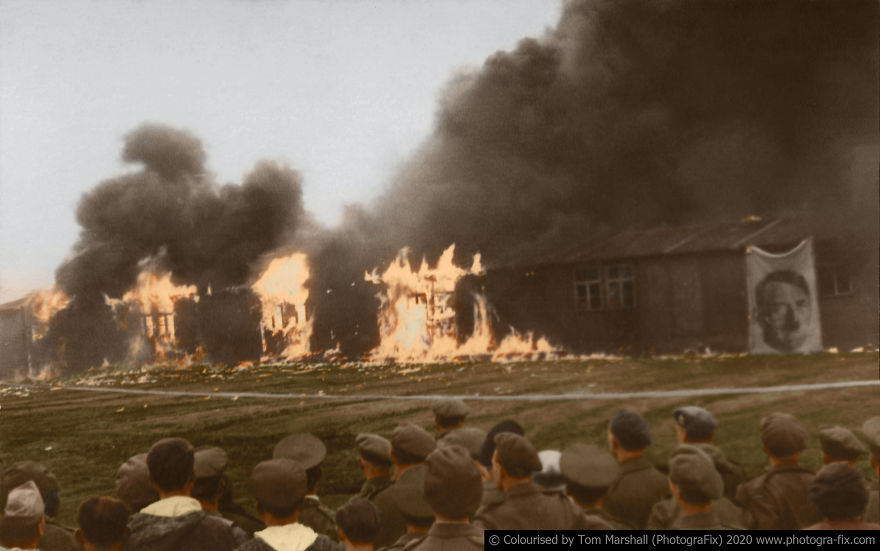 Tom Marshall's great grandfather, Charles Martin King Parsons, took these pictures during when he was a chaplain in the British Army. Armies marched through the camp and found huts full of survivors and dead bodies both.

After all prisoners were evacuated, the camp was burnt down in May 1945 as it was filled with typhus. 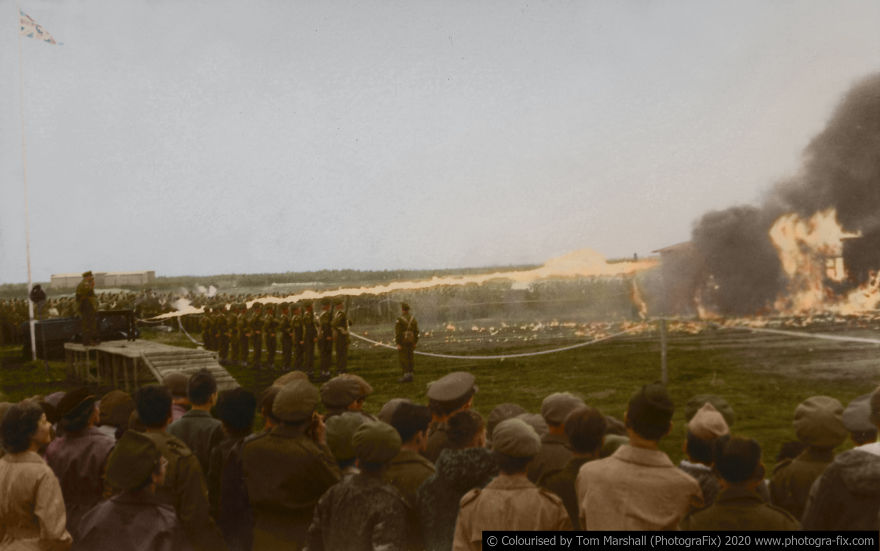 Charles himself never talked much about the time and these pictures were proof why. He has seen worse than what these pictures could convey - mass graves, corpses of both adults and children, etc.

He simply left memoirs of his time serving to his daughters. 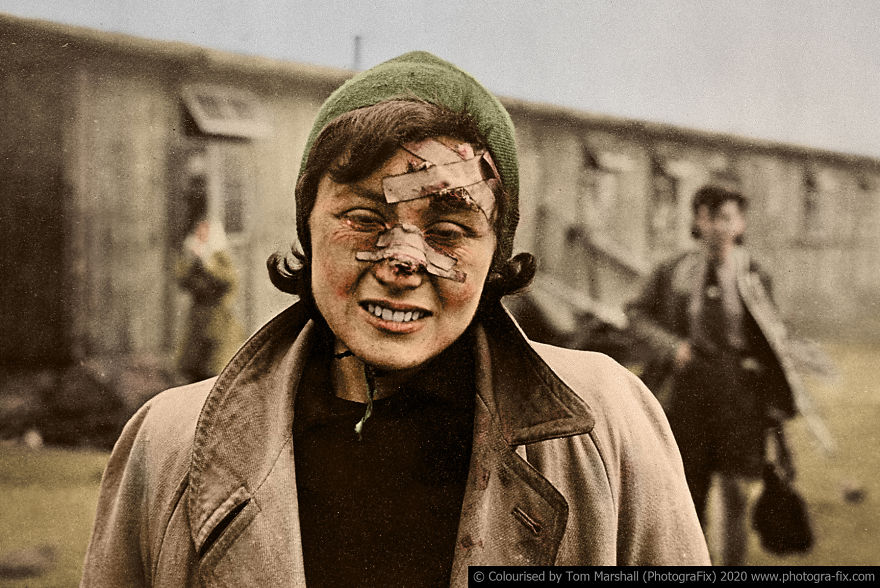 This woman was one of the survivors who still show horrific scars from the beatings by SS guards. 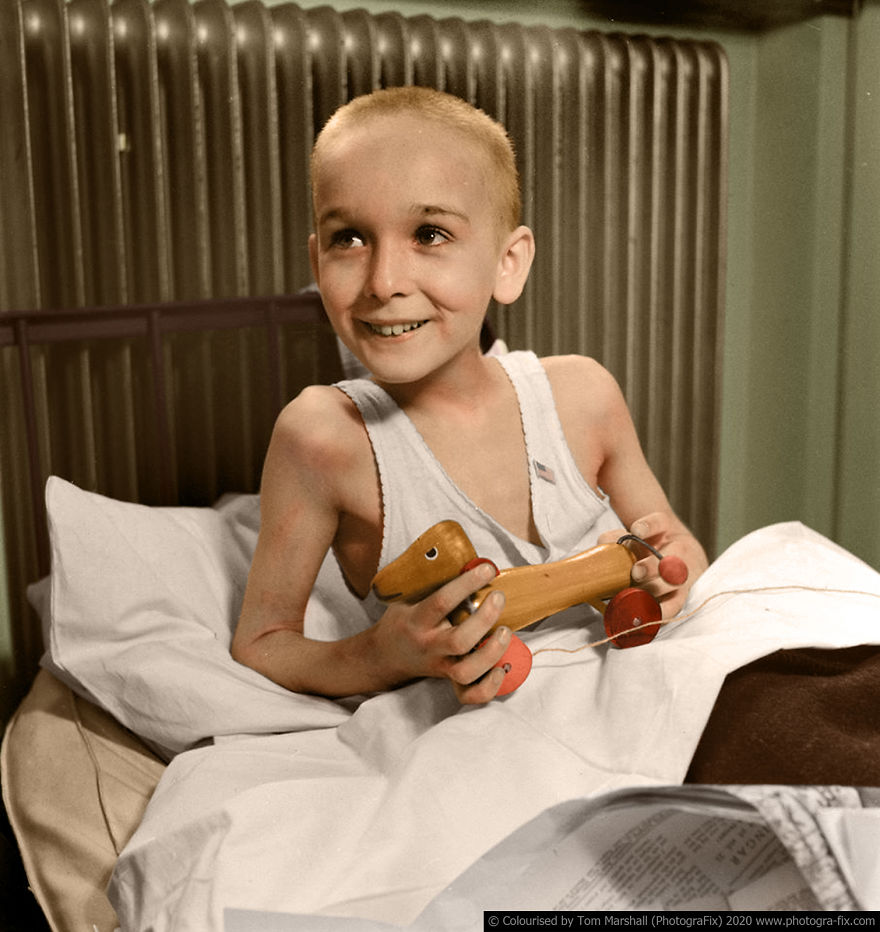 Kids are unlikely to survive the harsh treatments inside the camp. But this is one of the surviving boys who's hospitalized in Malmö, southern Sweden, 1945.

It has been 75 years since then and we must think of this question: Have humans learned from their mistakes? 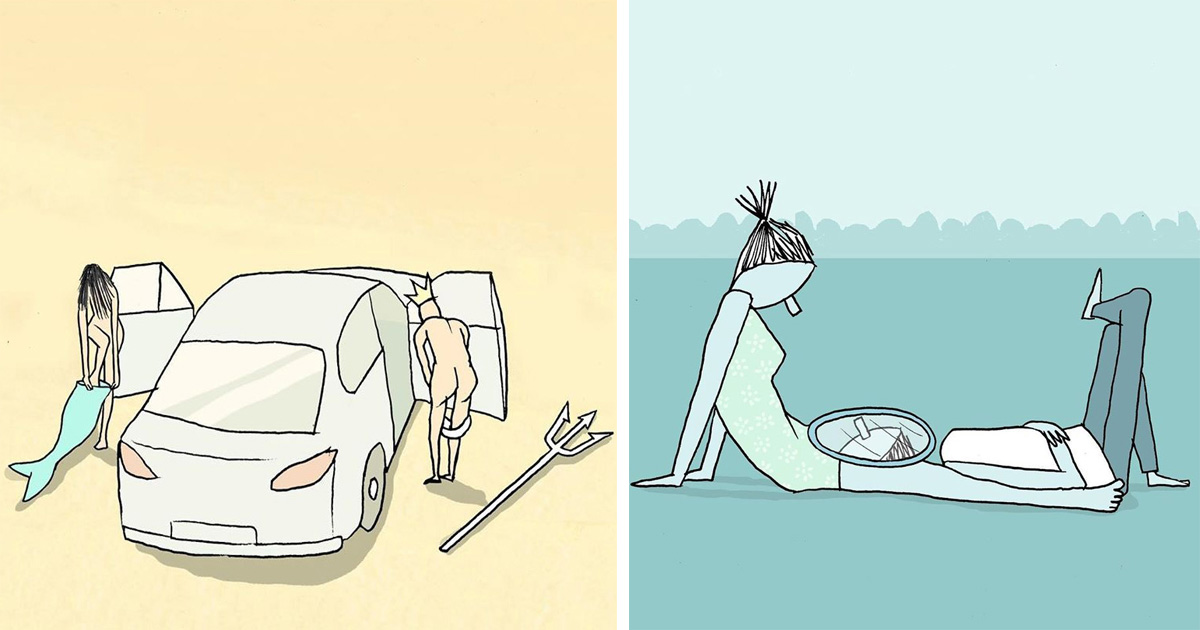