A lot is shared on the internet. And most people, these days’ share whatever they like without even verifying its authenticity. One thing you’ll find in plenty is fake photographs. Photo editing has become so commonplace that anyone can morph an image and upload it; add a couple of hashtags and it goes viral.

We agree that it’s not always easy to spot a fake photo, especially when the photo is real but the story behind it is fake. These are 11 photographs that are absolutely fake but you might have believed otherwise.

#1 What happened to the rainforest 10 years ago? 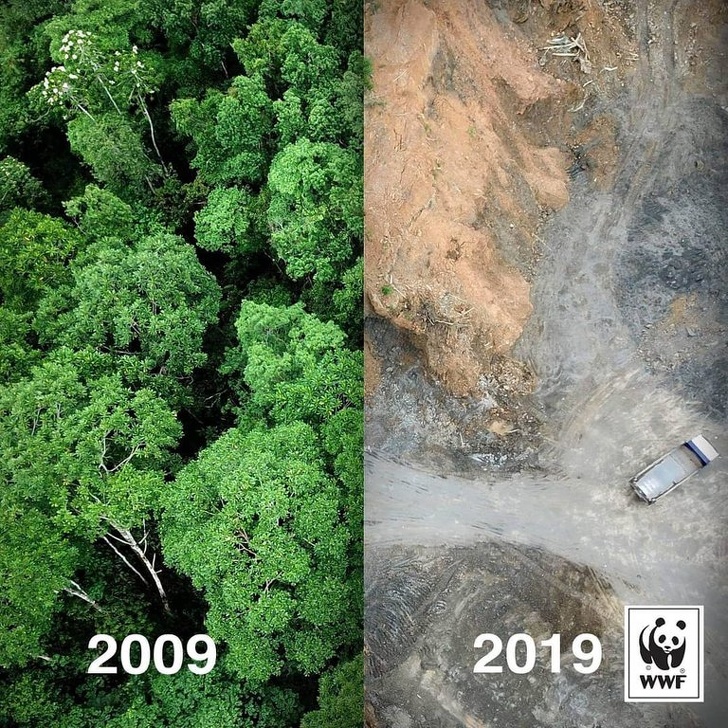 This photo collage went viral during the popular #10 Year challenge.  It was posted on Reddit accompanying a post that read ‘almost every year, 46,000 to 58,000 miles of forest are lost to deforestation.

While the photo certainly looks authentic, contrary to what many thought, it's not a collage of two pictures taken a decade apart. It Is one picture from a stock photo. This photo was originally taken in Malaysia where the rainforest was moved to increase the territory for growing palm trees. 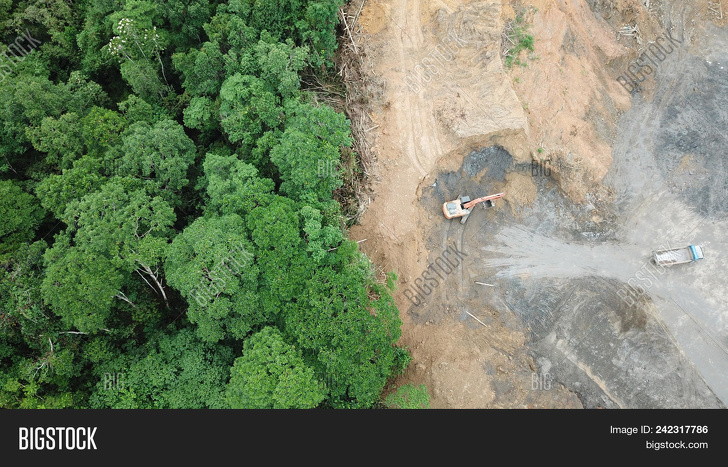 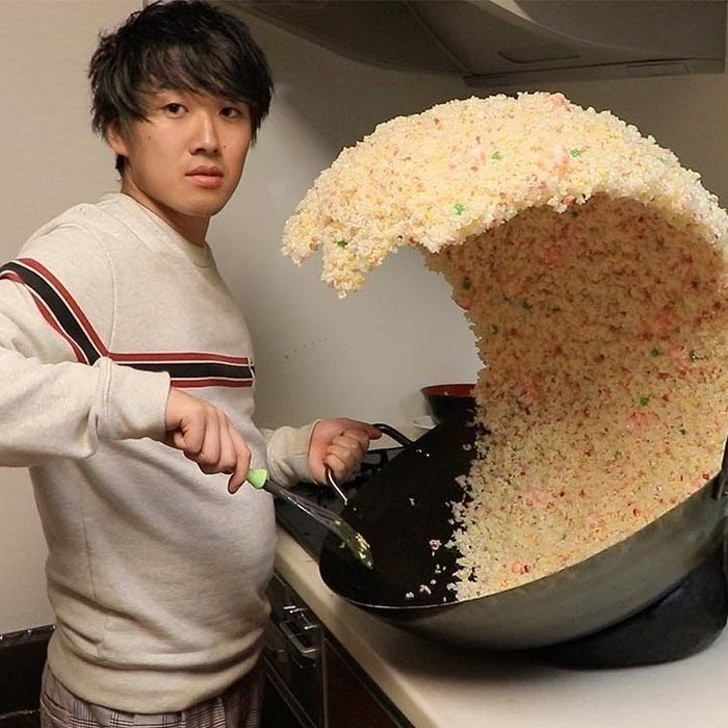 Most thought that the photographer had mad skills. how else would one capture this awesome rice-flipping moment? To spoil the fun, everything in the photo is fake, the rice is simply a sculpture that anyone can buy in a shop in Tokyo where fake foods are sold. 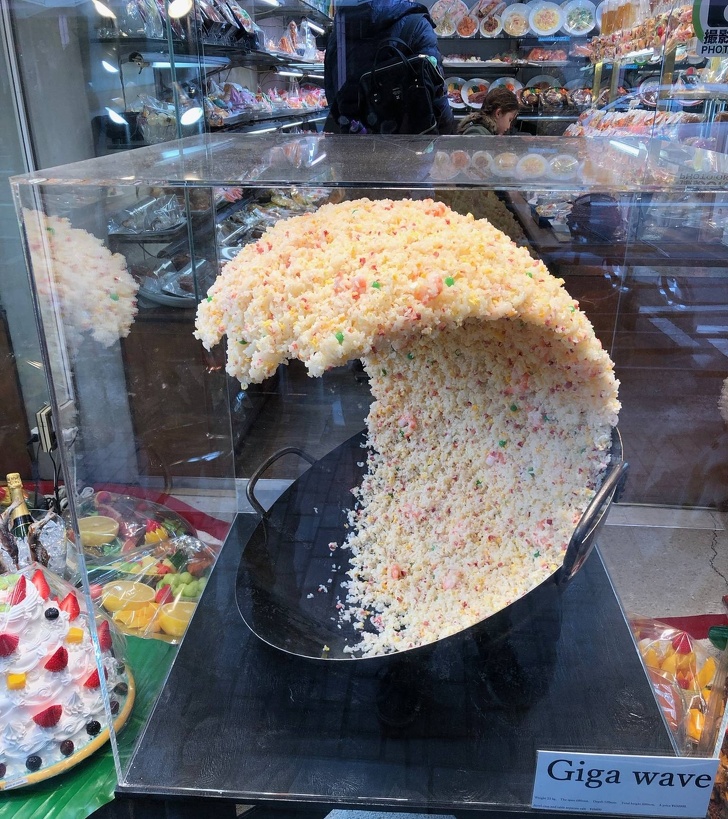 #3 A graffiti you can only see in the water 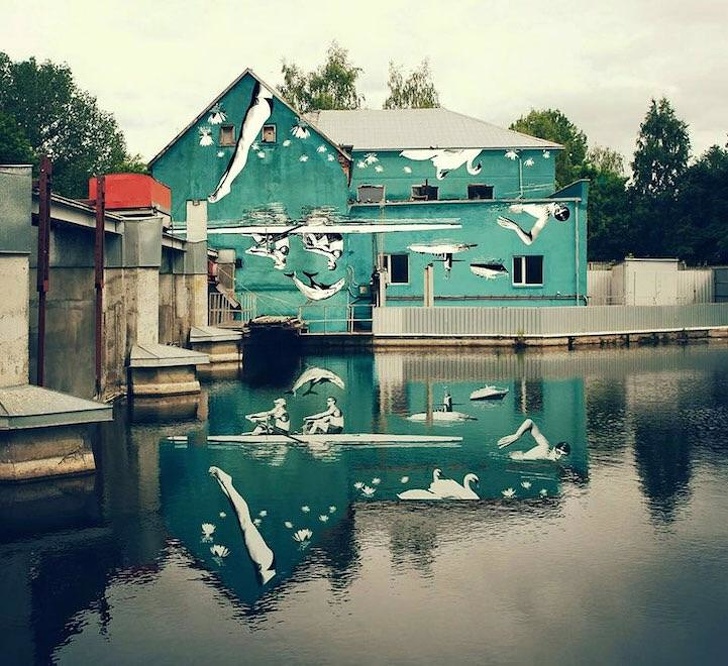 The photo went viral and became an instant hit on many websites. However, truthfully, the photo is not entirely real. The graffiti exist, so does the house and pond located in Mariampol Lithuania. The author is a street artist named Ray Bartkus who drew the pictures inverted for it to be reflected on the water.
But to see the pictures clearly, the surface of the water must be perfectly smooth, meaning-very still weather conditions otherwise, it would look like this: 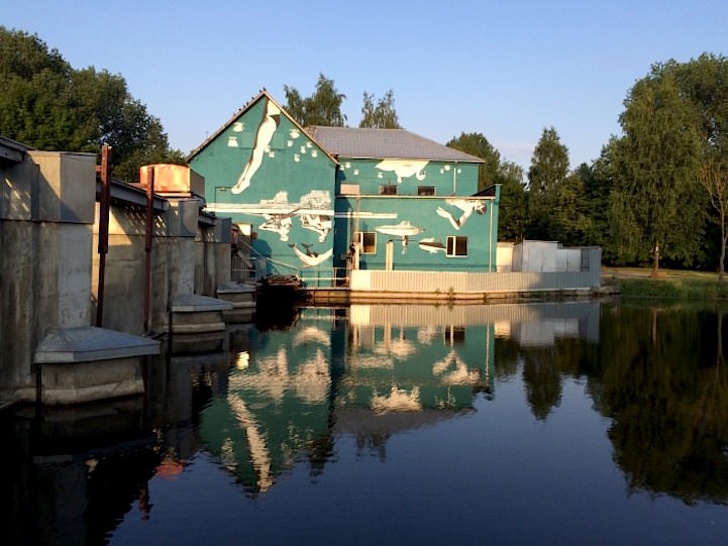 #4. A lynx and a deer were found in an office under a table. They were hiding from the California wildfires 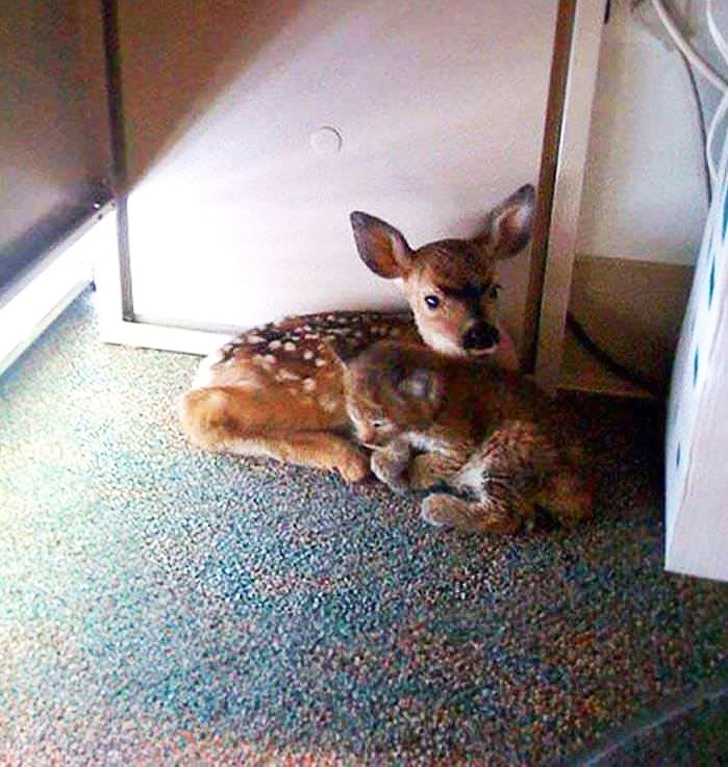 News sites and blogs all captioned the fawn and a bobcat that was found under a desk in an office building after it was razed down by the California wildfire. The photo is true, but every time there is a wildfire in the US, the photo is posted but with a different caption.
The picture was originally taken in Santa Barbara, California. These two had been found not far from Arnold Schwarzenegger’s ranch. Since there were no cages, they were put together in an office. Immediately it was put down, the lynx ran towards the deer and lied next to it. 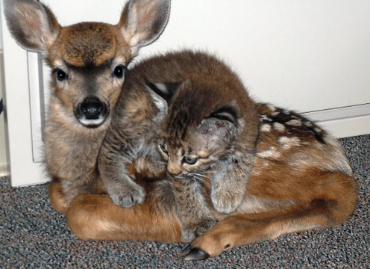 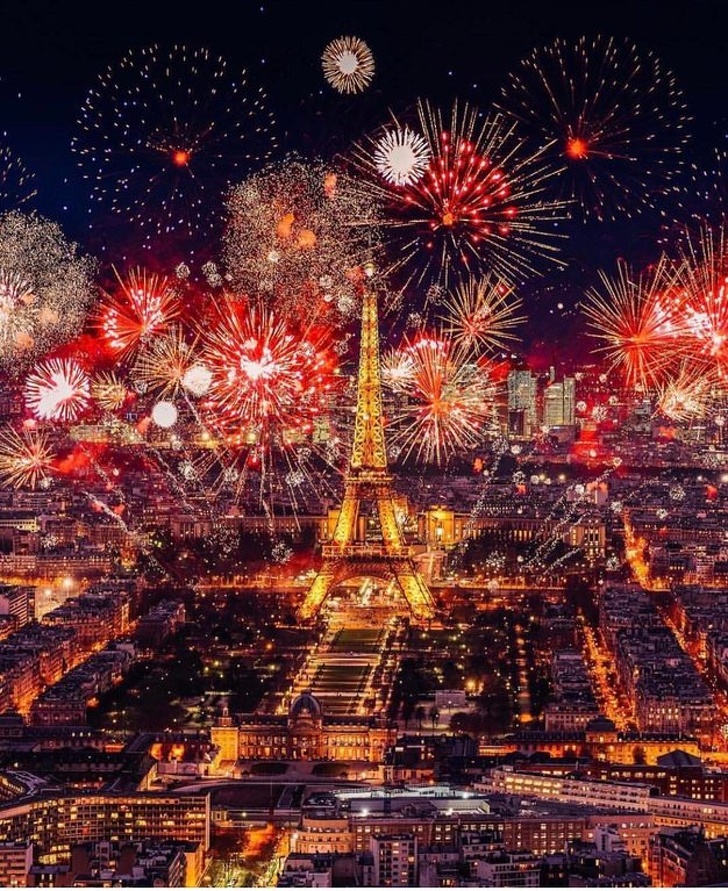 This photo went viral showing hundreds of fireworks that were supposedly launched on the new year’s eve in the French capital. Sad to say, the photo is a fake as the fireworks were launched on Eiffel tower and also internet users living in Paris claim it’s a fake. 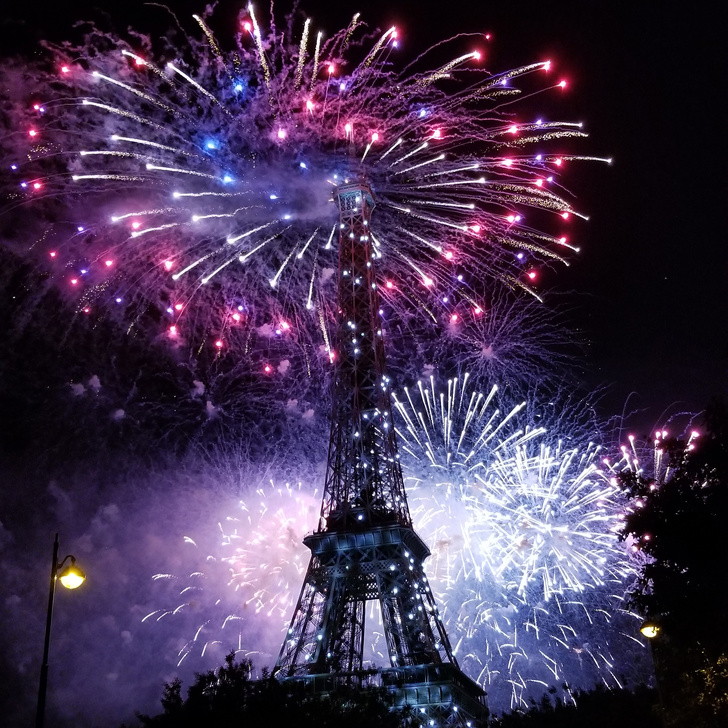 #6. A dog sleeping on the grave of its owner every night for 7 years 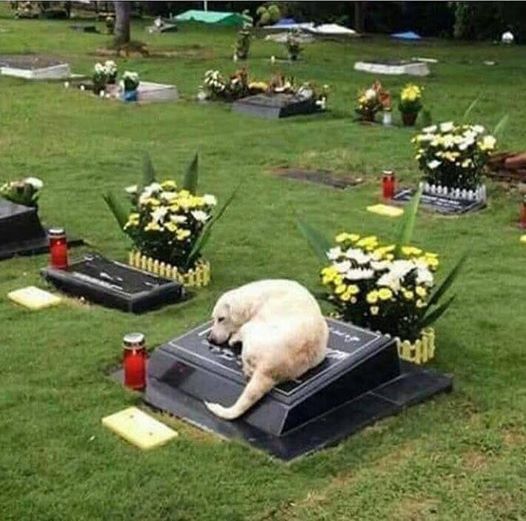 When it was first posted, this photo had almost 60,000 likes and more than 55,000 shares. Users were moved by the loyalty of the dog. The caption said that the dog named captain had been visiting its owner’s grave for the last 7 years and sleeping there till morning. This photo is absolutely real, so is the dog.
However, there is no connection, the same story has been linked to a different dog on a grave as well. The story was first shared by a Spanish Newspaper La Voiz in September 2012.


It has been 7 years now. The cemetery does not close the gates until he arrrives each night promptly at 6 pm. He sleeps there all night guarding the grave until the ground keeper opens the gate in the morning. This is a true picture of Capitan here. pic.twitter.com/UBZPmBzLwd 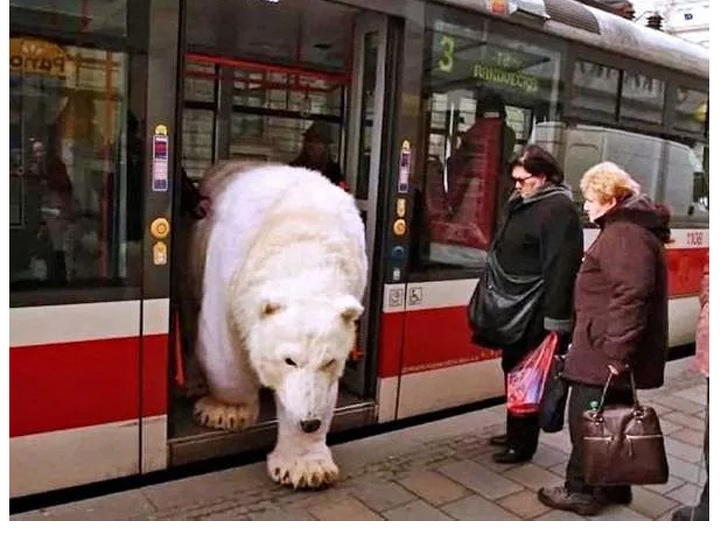 The photo is absolutely real. It was taken in the Czech Republic and uploaded unedited. However, you’d be surprised to know that the bear is fake. 2 Greenpeace activists wore costumes. The ‘bear’ was part of a ‘save the Arctic’ campaign around European cities. It walked to attract attention from onlookers.

#8. A goose frozen to a pipe warmed a puppy with its wing 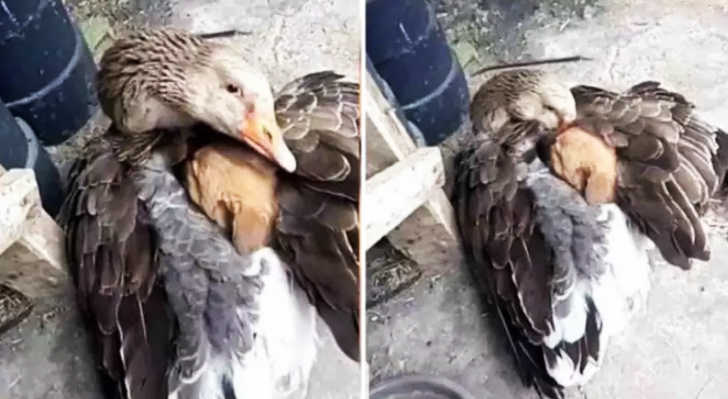 Hundreds of thousands of users rushed to like and like this photo of a goose that allegedly froze to a pipe and was warming a puppy with its wing. The pair was allegedly spotted in Montana.

While the photo looks real, the facts surrounding it are not very convincing. These pictures have been on Chinese websites since 2017 while the earliest post was made in March 2017. In the Chinese platform, the text under the photos says that the puppy was sitting on the side of the road, freezing. Ducks were passing by and the puppy ran toward one of them, like a mother it covered it with its wing.

The website also allows everyone to give their own description which means it’s almost impossible to find out if the story is real or made up. 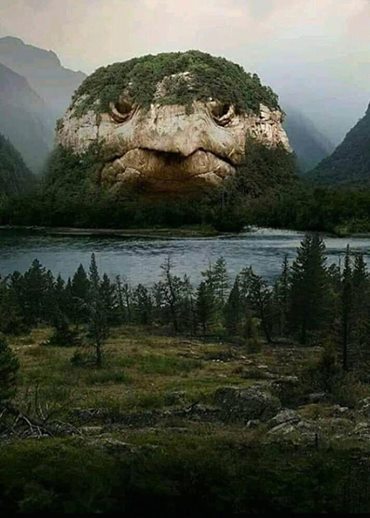 Amazing nature posted a photo on their Facebook account that showed a mountain that looks like a turtle. The post made in January 2019 went viral but this mountain doesn’t really exist. The photo was made by combining several pictures, some of them are shown below. 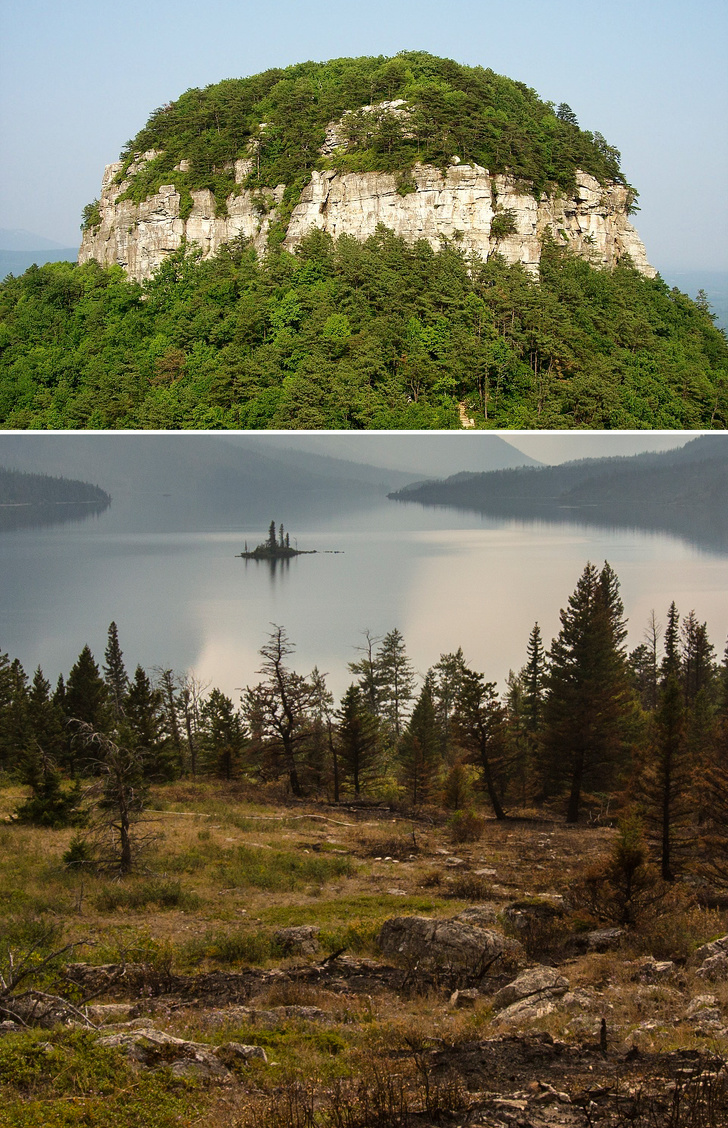 #10. A megalodon’s tooth in whale vertebrae 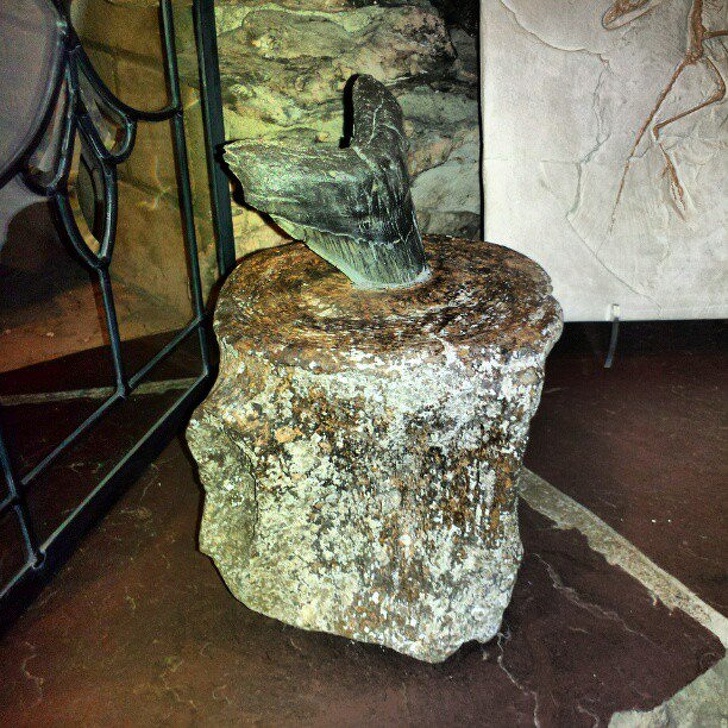 The photo above went viral, showing what looks like a megalodon’s tooth and a whale’s bone. In reality, the photos were found in different places at different times. One individual decided to combine them into one sculpture. Try to imagine how much a real meg’s tooth would cost, probably millions of dollars and it would be locked away in an archaeological museum.

#11. A cruise ship dumping waste into the sea

This photo caused a massive uproar on Facebook when it was uploaded not long ago. It had a caption that said ‘this cruise ship is dumping waste right into the sea.’. Users were quick to leave bad comments that forced the national director on the environment in Uruguay to respond.
Through his twitter account, he explained that the cruise ship was starting its turbines in order to drop the anchor, the brown spots were sand and sludge stirred from the bottom.
Tags: #photos #porpular #editing #fake photos